To share your memory on the wall of Lloyd Jewell, sign in using one of the following options:

To send flowers to the family or plant a tree in memory of Lloyd M "L.M." Jewell Jr., please visit our Heartfelt Sympathies Store.

We encourage you to share your most beloved memories of Lloyd here, so that the family and other loved ones can always see it. You can upload cherished photographs, or share your favorite stories, and can even comment on those shared by others.

Posted Dec 16, 2020 at 03:26pm
Marty, I am so sorry to see your Dad's obituary in a past edition of the Mech. Local. May your entire family be comforted and blessed by our Creator at this difficult time.
Comment Share
Share via:
LL

Posted Nov 23, 2020 at 11:26am
Mrs Jewell, Susan, Bonnie and Marty, Our deepest sympathy in your time of loss. You are all in our prayers. Mr Jewell was a wonderful man.

Posted Nov 22, 2020 at 07:41pm
Sorry to hear about the passing of LM. He was always a good friend to me. My condolenses to the family.
Comment Share
Share via: 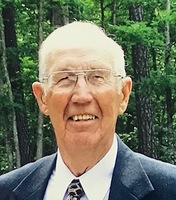