To share your memory on the wall of James Hinson, sign in using one of the following options:

Richard was President/Owner of Richard Hinson Exterminating, Inc. He was a member of Milden Presbyterian Church where he served as an Elder of ... Read More
James Richard Hinson, age 61, of Sharps, Virginia passed away on Saturday, August 10, 2019.

Richard was President/Owner of Richard Hinson Exterminating, Inc. He was a member of Milden Presbyterian Church where he served as an Elder of the church and as Sunday School Superintendent. He had a long and extensive tenure as a Mason where he served as High Priest Royal Arch Chapter 41. Richard also served as Secretary and Worshipful Master of the Warsaw-Bauman Masonic Lodge #332; District Membership Coordinator; former President of the Rappahannock Shrine Club and the District Deputy Grand Master of the 9th Masonic District. Richard was the Assistant Scoutmaster for Troop #203 and coached Little League. He loved hunting, fishing, golfing and snow skiing. He was a mentor to many in the community.

He was preceded in death by his father, James “Jimmy” Edward Hinson.

Services will be held at 11:00 a.m. on Saturday, August 17, 2019 at Milden Presbyterian Church with a Masonic service followed by a memorial service with the Rev. David Dunaway officiating.

In lieu of flowers, contributions may be made to The Good Samaritan Fund at Milden Presbyterian Church, P. O. Box 31, Sharps, VA 22548 or the Shriner’s Hospital for Children, 2900 Rocky Point Drive, Tampa, FL 33607, or shrinershospitalforchildren.org.
Read Less

To send flowers to the family or plant a tree in memory of James Richard Hinson, please visit our Heartfelt Sympathies Store.

From the Warsaw, Montross, and Callao VCB branches, William and Chery Stevens, and other have sent flowers to the family of James Richard Hinson.
Show you care by sending flowers

Posted Aug 20, 2019 at 09:42pm
Vi please know you are in my thoughts and prayers. Although, Richard is no longer with you, your memories keep him by your side and in your heart.
Comment Share
Share via:
TF

Posted Aug 17, 2019 at 09:35am
Vi, Michael, Marc and family- please know our thoughts prayers love and hugs are sent to each of you. Keep the precious memories of Richard and his smile in your heart where he will always remain. Love you all. Tracey & Wayne France
Comment Share
Share via:
NW

Posted Aug 14, 2019 at 01:15pm
Growing up with the Hinson family next door and knowing them throughout our lives was truly a blessing. We are so saddened to hear of Richard’s passing and send our deepest sympathies to his family. Richard was a sweet and wonderful man. RIP Richard.
Comment Share
Share via:
FB

From the Warsaw, Montross, and Callao VCB branches

Posted Aug 14, 2019 at 12:38pm
Wishing you peace to bring comfort, courage to face the days ahead and loving memories to forever hold in your hearts.

From the Warsaw, Montross, and Callao VCB branches purchased the Large Basket Garden for the family of James Hinson. Send Flowers 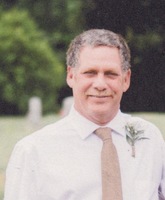