To share your memory on the wall of Joan Rush, sign in using one of the following options:

Clear evidence of Joan’s love for children is found with her own six sons and one daughter! She took tremendous delight in being a mother and that showed in everything she did. She was frequently found in the kitchen and kept everyone well-fed and well-loved. Always on the move, Joan worked very hard both inside and outside of her home. She cared for all living things – she had many dear Jack Russell terriers over the years and doted on all of them. She fed hummingbirds, songbirds, deer and squirrels in the yard and she loved to grow flowers. She loved being outdoors in nature. Joan was a devout Christian and enjoying leading children’s Bible study at church. She loved music and singing. As her own children grew and began to have children of their own Joan became the world’s best grandmother and then great-grandmother!

A graveside memorial service for Joan will be held shortly and details about this service will be posted on the Welch Funeral Home website as soon as they become available. Hospice chaplain Dolly Loomis will officiate. In lieu of flowers the family asks that you honor Joan by making a donation in her name to the Alzheimer’s Association, National Capital Area Chapter at 8180 Greensboro Drive, Suite 400, McLean, VA 22102 or at www.alz.org.
Read Less

There are no events scheduled. You can still show your support by sending flowers directly to the family, or planting a memorial tree in memory of Joan Marie Rush (Sutherland).
Plant a Tree

We encourage you to share your most beloved memories of Joan here, so that the family and other loved ones can always see it. You can upload cherished photographs, or share your favorite stories, and can even comment on those shared by others.

Plant a Tree in Memory of Joan
Plant a tree 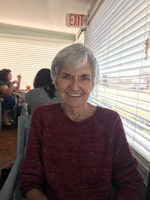