To share your memory on the wall of Mary Hertling, sign in using one of the following options:

In 1941, Mary left the only home she knew having barely reached the young age of 16 after graduating early from high school. She obtained a scholarship to college, lived the working-class ‘single life’ for several years before meeting and marrying a promising, young, then non-commissioned Marine, and went on to become a loving wife, mother, grandmother, great-grandmother, aunt, great-aunt and great-great aunt, as well as a gentle, caring friend to many, young and old alike. Returning to the Northern Neck in 1970 after her husband’s military retirement, Mary became an active community member assisting her husband with his role in building the local Boy Scouts of America program and serving in leadership roles within St. John’s Episcopal Church in Warsaw and the Military Officer’s Association (MOAA). She taught 3rd grade for a brief period of time in the Westmoreland County Public School system before and after her husband’s retirement and later provided part-time administrative support for a local veterinarian practice and the Richmond County School Board. In later years, Mary volunteered with the local Meals on Wheels program and knitted numerous baby caps for St. Mary’s Hospital in Richmond (and later for Sentara Martha Jefferson Hospital after moving to Charlottesville in 2013). She loved water aerobics and the special friendship formed with a group affectionately known to its members as the “Tappahannock Water Lilies”. In everything she did, Mary approached life with a quiet grace, patience, and strength.

The family would like to thank Mary’s kind and compassionate caregivers, especially Jackie Harris, with whom she developed a special bond and friendship, as well as all the staff of Charlottesville’s Home Instead Senior Care for their support. The family would also like to thank Hospice of the Piedmont for their gentle and caring assistance during her final months of life.

Hill and Wood Funeral Home in Charlottesville is helping the family with initial arrangements. Mary will rest eternally beside her beloved husband in a family plot at St. John’s Episcopal Church in Warsaw.

There are no events scheduled. You can still show your support by sending flowers directly to the family, or planting a memorial tree in memory of Mary Smith Hertling.
Plant a Tree 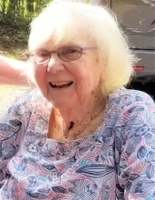