To share your memory on the wall of Donald Blakeslee, sign in using one of the following options:

Print
Donald Jack Blakeslee, known to family and friends as Jack, passed away November 12, 2020 in Warsaw, Virginia following a quick and significant decline. He was 96.

Jack was born on July 5, 1924 in Kalamazoo, Michigan to Julia and Warren... Read More
Donald Jack Blakeslee, known to family and friends as Jack, passed away November 12, 2020 in Warsaw, Virginia following a quick and significant decline. He was 96.

Jack was born on July 5, 1924 in Kalamazoo, Michigan to Julia and Warren Blakeslee. He survived his older brother Robert, who was killed in 1944 while serving as a pilot in WWII, and his sister Doris, who passed away in 1979. Jack enlisted in the Navy and served until WWII ended. He earned a mathematics degree from Kalamazoo College in 1949, as well as a Bachelor of Science degree from Purdue University in 1951. Jack married Virginia Riley in 1953, and remained with the love of his life until her death in 1996.

Beginning his career as an aeronautical engineer, Jack worked for many years at the Rand Corporation in Los Angeles, Bangkok, Thailand and Washington, D.C. After retiring from Rand, he served many years at the Pentagon for the Air Force Division of the Department of Defense.

After retiring from the U.S. Government, Jack moved to Lottsburg, Virginia, where he enjoyed one of his passions, sailing. He was for years an avid participant in the Northern Neck Sailing Association and loved cruising around the area. Having a keen intellect and can-do spirit, Jack enjoyed reading and building furniture. He also loved to hike, joining his children on long hiking trips all over the U.S. well into his 90s.

Jack’s honest, independent spirit will be missed by all who knew him. He leaves behind a legacy of respect, hard work and devotion, as well as a quirky sense of humor. He is survived by his children Mark, Michael, Susan and David, daughters in law Molly, Elizabeth and Gilda, and grandchildren Miranda, Eleanor, Karl and Felix.
Read Less

Print
A private gravesite memorial service will be held at a future date.

We encourage you to share your most beloved memories of Donald here, so that the family and other loved ones can always see it. You can upload cherished photographs, or share your favorite stories, and can even comment on those shared by others.

With much love, Jack and Nanette Keiser

Posted Nov 25, 2020 at 09:05pm
Uncle Jack was a true role model for all of us and, perhaps, a reason why we all eventually went to college. He was a wonderful human being!

3 trees were planted in the memory of Donald Blakeslee 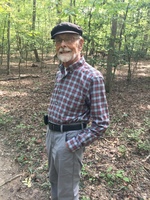