To share your memory on the wall of Stephen Robey, sign in using one of the following options:

Stephen was a gifted carpenter and mason who took pride in every job he worked on. Aside from work and family, Stephen’s other passion was fishing. He enjoyed a day on the water with a fishing pole in his hand more than anything else. He had a great sense of humor and made friends easily. Stephen also enjoyed eating oysters, gardening, and living here in the Northern Neck.

Stephen is survived by his beloved children: son Stephen L. Betts (Karrie) and daughters Krystal Lynn Robey and Angela Roberts. He is survived by bothers Mike Robey and Ronnie Robey; and sisters Debbie Salyers and Angie Zacario. He is also survived by twelve grandchildren: Lisa, Stephen, Justin, Airella, Lilianna, Misha, Sasha, Cody, Kylie, Jesse, Ben, Makayla and Alyssa. He will be fondly remembered by his many dear friends and fishing buddies as well.

The family will have a celebration of Stephen’s life at a date and time to be announced. To honor your memory of Stephen you may make a donation in his honor to the Richmond County Animal Shelter, 106 Wallace St, Warsaw, VA 22572.
Read Less

There are no events scheduled. You can still show your support by sending flowers directly to the family, or planting a memorial tree in memory of Stephen Garfield Robey.
Plant a Tree

We encourage you to share your most beloved memories of Stephen here, so that the family and other loved ones can always see it. You can upload cherished photographs, or share your favorite stories, and can even comment on those shared by others.

Plant a Tree in Memory of Stephen
Plant a tree 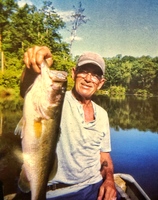