To share your memory on the wall of Mary Brauburger, sign in using one of the following options:

Mary Ball taught Sociology at Mohawk Valley Community College in upstate New York in 1972-1974. During that time, her work was published in the Journal of Marriage and Family. Upon moving back to Richmond, she went on to teach at J. Sargent Reynolds Community College until 1997. While there she served as Advisor for the Honor Society for several years.

In her youth she served as junior queen of the Richmond Garden Club in 1954. She was also an accomplished swimmer for the Westwood Officer's club in Richmond, competing in the Junior Olympics and breaking several state records.

She is survived by her children: Mary Virginia Brooks and husband Andrew of Richmond, VA and George Alexander Brauburger and wife Cameron of Powhatan, VA. Her greatest blessings were her four grandchildren, Hannah Evans and Teagan Alexandria Brauburger and James Henry and Stuart Alexander Brooks.

She is also survived by her sisters and brothers-in-law, Dorothy and Ken Davis of Atlanta, GA and Page and George Frischkorn of Lottsburg, VA; two nieces and three nephews.

Mary Ball was a member of St. Michael's Episcopal Church in Bon Air. She spent her retirement years at Brandermill Woods Retirement Community where she made many friends.

She never failed to ask her loved ones at each visit, "Did I ever tell you how much I love you?" Her sweet demeanor will be missed by all who knew her, and we will carry her love with us forever.

A private funeral service will be held followed by a memorial celebration at a later date.
Read Less

Posted May 26, 2020 at 05:23pm
Wishing you peace to bring comfort, courage to face the days ahead and loving memories to forever hold in your hearts. 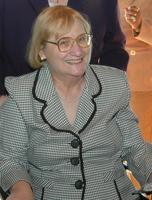