To share your memory on the wall of Herman Wilkins, sign in using one of the following options:

Provide comfort for the family of Herman Wilkins with a meaningful gesture of sympathy.

Clem dearly loved his church, Bethany Baptist. He served as a deacon there for over fifty years, was the Bethany cemetery sexton and served as the Sunday School secretary as well. He also loved to be outside and his outdoor talents were numerous. He grew a fantastic garden and fed his family as well as many in the community with his delicious home-grown vegetables. He adored Purple Martins and attracted many of them to his yard with the houses he made for them.

To send flowers to the family or plant a tree in memory of Herman Clemmons "Clem" Wilkins, please visit our Heartfelt Sympathies Store.

We encourage you to share your most beloved memories of Herman here, so that the family and other loved ones can always see it. You can upload cherished photographs, or share your favorite stories, and can even comment on those shared by others.

Posted Apr 04, 2020 at 11:53pm
I would like to extend my condolences to Mr. Wilkins family. I did not know him personally but I know Mrs Wilkins Sharon, and Barry. I understand your loss all too well having lost both of my parents. After a while only the good memories will remain.
E. B. Settle
Comment Share
Share via:

DEAR FAMILY,
RAY JOINS ME IN EXPRESSING OUR SYMPATHY IN THE LOSS OF YOUR LOVED ONE.
CLEM WAS KNOW TO MOST PEOPLE IN THE NN AND LOVED BY ALL.

Posted Mar 25, 2020 at 08:36pm
Many memories of Clem. One that my husband, Ron, brought up that took us right back to that time....we always used to
go to Afton Mountain in the fall for apple picking and that wonderful apple butter which was made right in the copper cauldrons.
Also, stopped at the county store for cheese/crackers and........pickled eggs. Well, when Clem heard about those pickled eggs, he
got the biggest kick out of that. Don't remember if he liked them or not but always would kid Ron about them anything we were
together.

Clem was a tremendous example of love and giving to his family many memories shared through the years. Perfect picture
of him in his garden as that's where he got so much enjoyment.

Posted Mar 24, 2020 at 10:34pm
Clem was one of my Heros of the Faith, serving as an example of what a man of God should be to his wife, his family, his Church, his community and his God. It is sad to know I will no longer see him here on Earth, but I am sure and confident that I will see and be with him forever when we all gather together in the Lord's presence in Heaven. Goodbye for now and thank you for your example you left for us to follow. 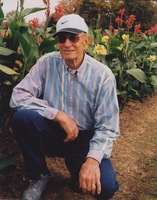