To share your memory on the wall of James Curlin, sign in using one of the following options:

“A Renaissance Man” – Loved by his family and friends from all over the world, James “Jim” William Curlin, 87, passed away peacefully at his home in Lottsburg on December 24, 2019 after a short illness. He... Read More
JAMES WILLIAM CURLIN

“A Renaissance Man” – Loved by his family and friends from all over the world, James “Jim” William Curlin, 87, passed away peacefully at his home in Lottsburg on December 24, 2019 after a short illness. He is survived by his wife of 65 glorious years, Patricia Stevens Curlin, daughter Kimberly B. and son-in-law John M. Wettroth (NC), grandchildren J. Travis (CA) and Chelsea K. (NC), and son James S., daughter-in-law Maria Argiri (Paris, France) and granddaughter Phaedra S. (CO).

Born on October 4, 1932 in Pine Bluff, AR to James Alexander Curlin and Virginia Keyes Barth, Jim grew up in Kirkwood, MO just outside of St. Louis. While attending the University of Arkansas-Monticello Forestry School, he met and married Pat. After his military service in Korea, he worked as a forester in TX and LA. He returned to school and earned a Ph.D. in Agronomy at Louisiana State University. This led to employment with Tennessee Valley Authority Forestry in Norris, TN and later with Oak Ridge National Laboratory (ORNL), where he was an Environmental Scientist. While working at ORNL, he earned a J.D. from the University of Tennessee-Knoxville Law School. He also became a Home Amateur Radio Operator (WB4GBS). He was an avid reader of history, including presidential biographies, as well as genealogy. Lifelong learning was one of his many passions.

Interested in politics from a young age, Jim served as Vice Mayor of Norris, TN. He moved his family to Washington, DC where he worked for the Federal Government for 23 years, starting at the Library of Congress. Later, he was appointed Deputy Assistant Secretary at both the Departments of Commerce and Interior. He finished his career at the Office of Technology Assessment, one of three research arms of Congress, where he worked for 15 years.

He retired to the Northern Neck and pursued his biggest passion – Sailing – fulltime. He taught himself and his family to sail on the lakes of Tennessee. Over the years, Jim and Pat and family and friends sailed from the Chesapeake Bay to Nova Scotia to Bermuda to the Caribbean. Captain Jim and Pat’s biggest sail was to the Mediterranean for six years (2000-2006), only coming home to enjoy the fine Virginia winters. They sailed from one end of the Med to the other: the Azores, Gibraltar, Spain, Portugal, Morocco, and Turkey. In 2005, they joined 60 boats for the Eastern Mediterrean Rally sailing from Turkey to Cyprus, Lebanon, Syria, Israel, and Egypt. Jim and Pat made many great friends during their sailing years all over the world.

Jim had a quick wit, a keen sense of humor, and cared greatly about family, friends, dogs and country. He is missed by all. A celebration of Jim’s life will be held at a later date. The family requests that in lieu of flowers, a donation may be made in his memory to the Callao Volunteer Rescue Squad, 1348 Northumberland Hwy., Callao, VA 22435
Read Less

Print
A celebration of life will be held at a later date.

Plant a Tree in Memory of James
Plant a tree 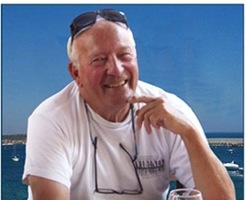