To share your memory on the wall of Robert Elam, sign in using one of the following options:

There are no events scheduled. You can still show your support by sending flowers directly to the family, or planting a memorial tree in memory of Robert Andrew Elam.
Plant a Tree

Posted Dec 12, 2019 at 11:21am
So sorry to learn of Bob's passing. My condolences to his wife Ann and his family. I was a lawyer working in mine safety and Bob and I worked on many disasters and projects. He was alway polite and easy to work with. And a remarkable ability to explain complex mining issues to non-mining people such as myself who needed to provided legal assistance to the projects. May he Rest In Peace. Tom Mascolino
Comment Share
Share via:
EC

I am sad to hear news of Bob’s passing. I worked with Bob for 30 years or more, first as a staff lawyer in the Interior Department and then in higher positions after we moved to the Labor Department. Bob taught me so much about mine safety and I remember fondly his intelligence, patience, integrity and good judgment. My deepest sympathy goes to his family and friends who I know mourn his loss. Ed Clair
JC

Jerry and Judy Collier purchased flowers and planted a memorial tree for the family of Robert Elam. 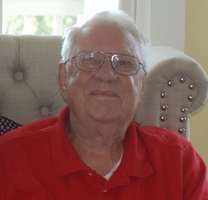