To share your memory on the wall of Helen Murphy, sign in using one of the following options:

Mrs. Murphy spent most of her life at her beloved King Copsico Farm in Westmoreland County. She was active in the Episcopal Churches of Cople Parish and served as Senior Warden, member of the Vestry and Altar Guild, and Lay Eucharist Minister.

Mrs. Murphy was a former trustee, or member of the board, of many organizations including the Virginia Historical Society, Lewis Ginter Botanical Garden, The Menokin Foundation (former President), The Nature Conservancy, Department of Historic Resources, St. Margaret’s School (Tappahannock), Rappahannock Community College (founding board member and recipient of an honorary degree), Alliance for the Chesapeake Bay, Preservation Alliance of Virginia, and the Virginia Outdoors Foundation. In 1999, she was named Volunteer of the Year by the Central Virginia Chapter of the Association of Fundraising Executives. Mrs. Murphy and her husband received the 2019 Outstanding Virginian Award established by the Virginia General Assembly in 1983.

Her club memberships included: The Country Club of Virginia, the Woman’s Club (Richmond), the National Society of the Colonial Dames of America, the Hillsboro Club in Hillsboro Beach, Florida, and the Coral Beach and Tennis Club in Bermuda.

Mrs. Murphy loved her family, her home on the shores of the lower Potomac River, dogs, reading, sailing, Bermuda, UVA basketball, laughing, and lilies which she raised and showed with some success.

Her funeral service will be held on Tuesday, October 22, 2019, at 11 a.m. at Yeocomico Episcopal Church, 1233 Old Yeocomico Road, Kinsale, Virginia 22488, with burial in the church cemetery. A reception will follow in the adjacent Ameslee Hall.

In lieu of flowers, a memorial contribution may be made to The Episcopal Churches of Cople Parish, P. O. Box 249, Kinsale, Virginia 22488; The Menokin Foundation, P.O. Box 1221, Warsaw, Virginia 22572; or The Garden Club of Virginia, 12 East Franklin Street, Richmond, Virginia 2321.9
Read Less

To send flowers to the family or plant a tree in memory of Helen T. Murphy (Turner), please visit our Heartfelt Sympathies Store.

We encourage you to share your most beloved memories of Helen here, so that the family and other loved ones can always see it. You can upload cherished photographs, or share your favorite stories, and can even comment on those shared by others.

Rob Tombes, Love Your Besties, and other have sent flowers to the family of Helen T. Murphy (Turner).
Show you care by sending flowers

Posted Oct 31, 2019 at 09:33pm
Helen, was my first cousin (our fathers were brothers) whom I had not seen in years; however, I always enjoyed keeping up with her through her Christmas updates from King Capsico Farm. . Tayloe and family, I am so very sorry for your loss of this special woman. Nancy Turner Gibson.
Comment Share
Share via:
HS

Posted Oct 21, 2019 at 12:58pm
With deepest sympathy, The Board of Trustees and the staff of The Nature Conservancy in Virginia

Flowers were purchased for the family of Helen Murphy. Send Flowers

Love Your Besties purchased flowers for the family of Helen Murphy. Send Flowers

Flowers were purchased for the family of Helen Murphy. Send Flowers 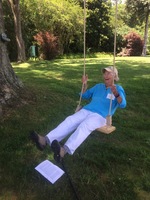