To share your memory on the wall of Robert Wilson, sign in using one of the following options:

He is preceded in death by his father, Robert “Bobby” Edward Wilson.

A visitation will be held on Saturday, August 3, 2019 from 1 pm to 2 pm at Warsaw Baptist Church in Warsaw, VA with the funeral and burial services immediately following at 2 pm. Reception to follow at the church.

To send flowers to the family or plant a tree in memory of Robert Allen "Rob" Wilson, please visit our Heartfelt Sympathies Store.

Loretta Kane & Kathleen Egan, Love, Beverly & Maureen, and other have sent flowers to the family of Robert Allen "Rob" Wilson.
Show you care by sending flowers

Posted Aug 04, 2019 at 09:40am
I am so saddened to hear of Rob's passing. Too many years since I saw him I am sad to say. A friend during HS and a classmate at JMU, I recall a road trip to UVA as a fun time with Rob and well as others. I am sorry that I wasn't able to attend services and sending my condolences to Jay and Nancy.

Posted Aug 02, 2019 at 05:16pm
Rob Wilson was a friend of mine. Rob and my wife, Mary, worked together at AT&T back in the 80’s and 90’s. I got to know Rob during annual beach vacations at the Outer Banks and various other get togethers including anniversaries, birthdays, Christmas dinners, crab feasts, etc. I will always remember Rob’s kind, playful, and slightly mischievous spirit. Every time we got together we could count on plenty of good conversation, pranks, laughs, jokes, and drinks. Rob left us way too soon. I am grateful for having known him, for the times we shared, and for counting him among my friends. I pray that our memories of Rob will eventually bring us comfort and make us smile until we meet again.
Comment Share
Share via:
LE

Posted Jul 31, 2019 at 01:17pm
Jay, Sue, Donie, Nancy, Leann, and Family,
I am so sorry to hear about the passing of Rob. He left us to soon.. It was great to meet Rob and be around him the times he visited in Georgia.. He was a great guy and a fun person to be around... He will be greatly missed..
My thoughts and prayers are with the Wilson family during this difficult time...
God Bless your Family,
Bruce Coomes
Comment Share
Share via: 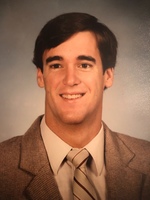