To share your memory on the wall of William King, sign in using one of the following options:

Provide comfort for the family of William King with a meaningful gesture of sympathy.

Capt. King served 30 years in the United States Coast Guard. He graduated from the Coast Guard Academy in New London, CT in 1953 with a degree in Engineering. He continued his education at the University of Michigan with a Masters Degree in Naval Architecture and Marine Engineering. He served as Chief Engineer on many shipbuilding projects including the 210 ft Cutter “Active”, 12 378 ft Cutters, 2 Intercoastal Water Buoy Tenders and was the Commanding Officer of The Greater Antilles Section in the Caribbean.

Capt. King was a faithful and longtime member of Cople Episcopal Parish where he served as Treasurer for 10 years. He sat on the boards of Sons of American Revolution, Rotary Club, MOAA, Northern Neck Historical Society, National Reynolds Association and the Glebe Harbor/Cabin Point Property Owners Association He was a founding member of the Hospice Support Services of the Northern Neck and Westmoreland Players. He was married to his wife Helen Amanda for 61 wonderful years. He was her primary caregiver for many years and was a loyal and devoted husband, father, grandfather and had many dear friends all around the world. .He had a great love for his family and community. He enjoyed researching his family genealogy and loved that his ancestors came from the Northern Neck where he and Helen lived for over thirty years - the longest they ever lived anywhere.
He was preceded in death by his father and mother, Archie Louis and Bernadine Emma King; two brothers, Fred and Joe King and a sister, Anne Johnson and his his wife Helen Amanda King

Funeral services will be held at 2:00 p.m. on Saturday, June 22, 2019 at Yeocomico Episcopal Church. Interment will follow in the church cemetery.
The family will receive friends 5:00 to 7:00 p.m. on Friday, June 21, 2019 at the Welch Funeral Home, Montross Chapel.
In lieu of flowers, memorial contributions may be made to Cople Episcopal Parish, PO Box 249, Kinsale, VA 22488.
Read Less

To send flowers to the family or plant a tree in memory of William Louis "Bill" King, please visit our Heartfelt Sympathies Store.

Gigi, Paul, Mark, Luke and George and Theresa Feldman have sent flowers to the family of William Louis "Bill" King.
Show you care by sending flowers

Posted Jun 21, 2019 at 08:39am
Dear Christina & Sean, Our deepest and heartfelt sympathy to you and your family during this sad time. You are all in our thoughts.

Vivid Recollections was purchased for the family of William King. Send Flowers

Posted Jun 20, 2019 at 03:46pm
Our deepest sympathy. Our prayers are with you during this time of loss. Carolyn Millay & family

Flowers were purchased for the family of William King. Send Flowers

Flowers were purchased for the family of William King. Send Flowers 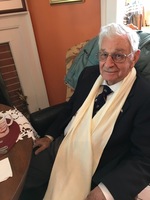